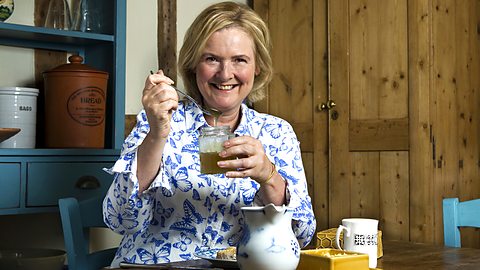 “The Wonder of Bees with Martha Kearney”
“Series which follows Martha Kearney’s bee-keeping year and explores the science, art and culture of the honeybee, the most ingenious insect known to humankind.”
On BBC4 (tv) first part, Monday 14th April  at 8pm (with a repeat after midnight)
thanks to Dougal for pointing this out.
http://www.bbc.co.uk/programmes/p01t6nz6

Episode 1 of 4
DURATION: 30 MINUTES
Martha Kearney’s year gets off to a bad start when unseasonal snow in spring threatens to kill the bee colonies she keeps in her garden in Suffolk. With help from a master beekeeper Martha feeds her bees and takes one of the hives to a wildflower meadow at a neighbour’s house along with two brand new hives.
She discovers the intricate hierarchy within the bee colony and learns how the organisation of the hive has become a metaphor for human society. At a London school she learns the secrets of urban bees’ success even while bees in the country as a whole are in decline. The episode ends with three new hives established on a wildflower meadow, ready to start producing classic British wildflower honey.